Service
Learn more about unreinforced masonry (URM) buildings and how they perform during an earthquake. Find out about possible measures that can be taken to mitigate the hazards posed by URM buildings. Learn about URM buildings in Portland and a brief history of development of regulations.
On this Page

URM stands for unreinforced masonry. Built generally in the late 1800s until about the 1960s, URM buildings are constructed of walls (typically on the exterior) often made of brick, hollow concrete block, hollow clay tile or stone.  Because of its durability, fire resistance and architectural character unreinforced masonry had often been the construction material of choice.

As the name implies, URM walls have little or no reinforcing steel. These walls typically support floor and roof framing commonly of wood construction. Typical construction practice of that era was to let the floors and roof framing simply bear directly on the exterior walls with no structural attachment necessary to resist earthquake forces.

How unreinforced masonry (URM) buildings behave during an earthquake

In general, URM buildings perform very poorly in earthquakes. There are numerous examples from around the world that show URM buildings are likely to suffer extensive damage and could partially or completely collapse during a seismic event.

A few recent examples of earthquakes include Italy (2016), Christchurch, NZ (2011), Napa, CA (2014), Scotts Mills, OR (1993), and Nisqually, WA (2001). Poor building performance poses three basic types of risk: injury, property damage and loss of use. All three kinds of risk are usually greater for unreinforced masonry buildings than for other building types.

URM buildings pose risk not only to occupants of the buildings but also those in adjacent buildings and pedestrians due to collapse and/or falling debris. Past earthquakes have shown that URM's are particularly vulnerable to falling parapets, chimneys, cornices or other exterior ornamentation and exterior walls collapsing which could be potentially lethal.

Why unreinforced masonry buildings perform poorly in an earthquake event

URM buildings were not specifically designed and built to resist seismic loads. Building codes requiring seismic design were not introduced until much later. This combined with the nature of the URM materials, age of the building and historical construction practices makes URM buildings more vulnerable than other building types.

Find out if the structure you own, rent, or do business in is an unreinforced masonry building

There are several clues based on visual observation that may indicate that the building is a URM building:

Some or all of the above characteristics may be present in any given building however presence or absence of one or many of these characteristics is not a guarantee that the building is a URM or not. It is highly recommended that the services of a licensed structural engineer be obtained to confirm if a particular building is a URM. The engineer can use various techniques to determine if a building is a URM, including field observations which may include removal of finishes to observe construction, examination of construction documents, and testing to confirm presence of any reinforcing steel.

The City of Portland maintains a list of potential Unreinforced Masonry (URM) buildings.

Based on an assessment completed in 2016, the Bureau of Development Services estimates Portland has over 1,600 URM buildings. It is estimated that less than 20% of the URM’s have either been demolished or have been fully or partially retrofitted.

Most of the 1,600+ URM’s are single-story (approx. 56%). The average age of these buildings is 90 years. These structures house more than 7,000 residential units in approximately 250 buildings.

URM buildings pose a danger to public safety during an earthquake, risking death or injury, property damage, and loss of economic use. URM buildings are also part of the historic and cultural character of many Portland neighborhoods. Some are designated as historic structures. Retrofitting or seismically upgrading these buildings will save lives, reduce injuries, and ensure some will remain following an earthquake.

Seismic retrofits can vary in scope and provide different levels of safety. A limited scope (and lesser expense) such as bracing parapets will provide some pedestrian and occupant protection from falling debris but may not prevent a partial or complete building collapse. A complete code-compliant retrofit can be very expensive but may prevent collapse and extensive damage from an earthquake.

The illustrations below indicate some of the retrofit measures and the resulting seismic protection that may be provided.

Retrofitting doesn’t guarantee a building can be occupied following an earthquake, but in some cases – especially smaller earthquakes – residents and businesses are able to quickly reoccupy the building. This adds to Portland’s resilience as a community.

What is Portland doing about retrofitting URM buildings?

In recognition of the high risk of a seismic event, Portland City Council commissioned a task force in 1993 to address the danger posed by existing buildings in an earthquake and recommend policies to mitigate these hazards. The result of the work of this task force was the adoption in 1996 of City’s Title 24.85 “Seismic Design requirements for Existing Buildings”  which requires seismic retrofits to existing buildings when a building undergoes a change of occupancy or other major renovation.

Realizing that the current regulations have not been effective in reducing the hazards posed by URM buildings, City council directed City staff to develop recommendations to mitigate hazards posed by URM buildings. Three committees were formed to study this issue and a final report was presented to council in 2018. This report recommended minimal mandatory seismic upgrades along with closing loopholes in existing regulations. The reports of the three committees and the final recommendations can be found online.

City Council did not adopt the report but instead established a separate working group to reconsider the standards for seismic upgrades along with financial support that can be provided to URM owners. Council also adopted a resolution requiring all un-retrofitted URM buildings be placarded and tenants notified of the risk posed by URM buildings. This ordinance was however repealed based on the findings of a federal judge that the ordinance was illegal. The second working group was formed in 2019 but disbanded in 2020 due to the pandemic and city budget constraints. 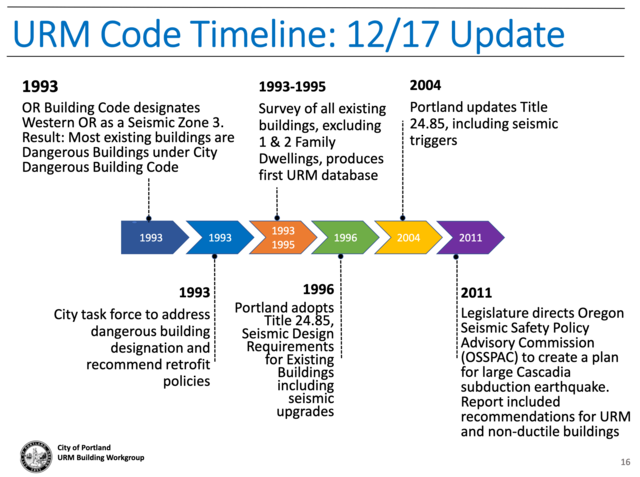 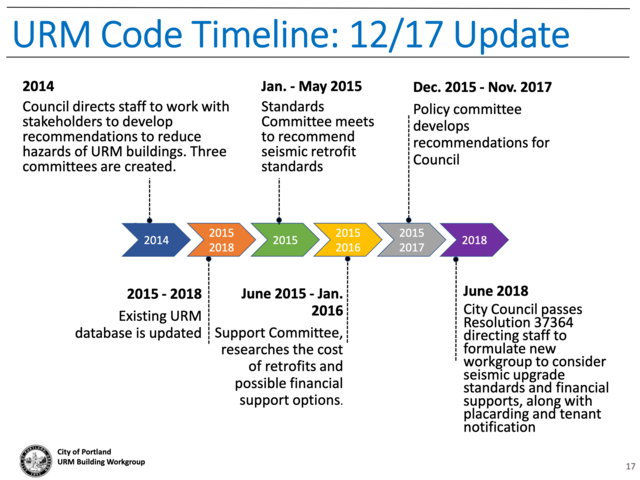 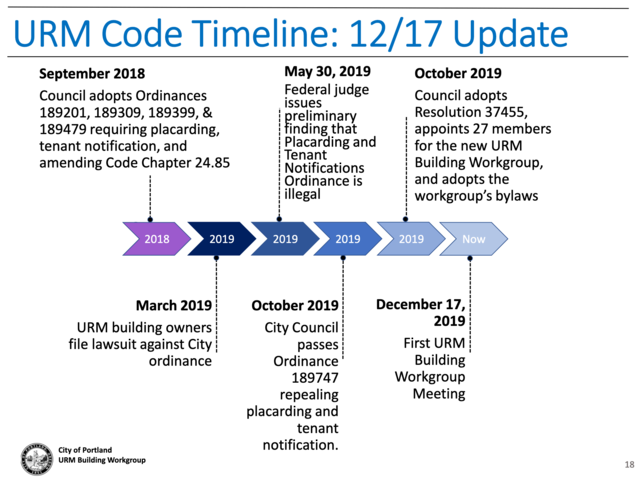 A seismic upgrade for URM buildings (and other existing buildings) may be required if you invest in a major renovation, re-occupy a vacant building, or change the use or occupancy of a building. Chapter 24.85 of City Title 24 contains passive triggers which if exceeded will require a seismic evaluation or upgrade. These triggers include:

You can also review Chapter 24.85 Seismic Design Requirements for Existing Buildings. For more information, check out the related web pages.