Effective July 28, 2021, face coverings are required for everyone inside City facilities and vehicles. Check our face coverings page for more information.

In accordance with updated public health guidelines and consistent with city policy, Bureau of Development Services inspectors will wear masks for all in-person inspections of indoor occupied properties and maintain at least six feet social distancing at all times, until further notice.

Newsletter
Bureau of Development Services (BDS) Structural Engineer Amit Kumar knows that if an earthquake hits the Portland area, the 1,650 structures of this type will be in dire jeopardy of collapsing. He’s working to prevent that from happening.
Published
April 10, 2018 11:53 am
Updated
April 10, 2018 1:24 pm

BDS Structural Engineer Amit Kumar knows that if an earthquake hits the Portland area, the 1,650 structures of this type will be in dire jeopardy of collapsing. He’s working to prevent that. 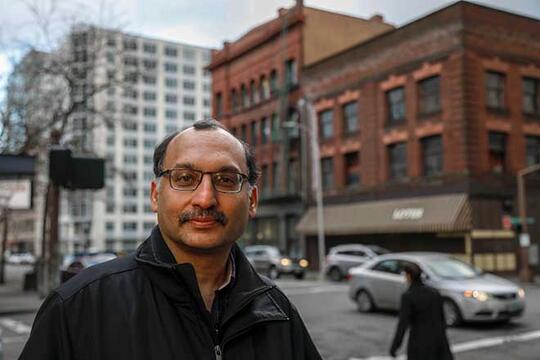 There are about 1,650 URM buildings in Portland. Amit Kumar says publicly labeling them would help raise awareness about safety.

In 1994, Amit Kumar remembers visiting the Los Angeles area of Northridge, California in the aftermath of a 6.7 magnitude earthquake.

The quake lasted approximately 20 seconds, caused billions of dollars of damage, injured nearly 9,000 people and killed 57 others. He saw collapsed buildings and a hospital that had to be evacuated. “I was new in the profession,” Kumar says, “so it really hit me hard. I didn’t pay much attention to earthquakes in our area before I saw the wreckage in Northridge.”

Working for a structural engineering consulting company in Portland at the time, Kumar went to help the local office as they focused on earthquake recovery. The Northridge community suffered the loss of many historic adobe buildings, and it caused everyone to reflect on the regulations of unreinforced masonry buildings, known as URMs.

Today, Kumar is a Senior Structural Engineer in Plan Review Services at BDS, where he uses his passion for public safety to advocate for improving safety throughout Portland Metro.

After 30 years of working on improving URM buildings, Kumar says there is a universal understanding that these structures can be dangerous in the event of an earthquake. “You hear about earthquakes all around the world, and every single time you hear primarily about URM buildings causing the most damage,” Kumar says.

There are an estimated 1,650 URM buildings in Portland, and Kumar sees his role as helping to make sure that these structures are upgraded to a level that will prevent them from collapsing if the city is hit by a quake.

Kumar says that many residents don’t consider an earthquake to be a threat. “For some, it’s out of sight, out of mind,” he says.

Science, though, shows we will experience a major earthquake along the Interstate 5 corridor at some point. Studies by earthquake experts say a major quake hits this area every 300 years. They say we are long overdue and it’s just a matter of time before it happens.

The City’s job? To plan ahead. For the last few years, the City has engaged staff from BDS, the Bureau of Emergency Management, Prosper Portland, as well as local engineers, architects, and geologists on multiple committees to determine how to engage over safety standards. Also, a committee made up of residents, including URM building owners and other stakeholders has made recommendations to City staff.

The Portland City Council will hear about the work and the recommendation on May 9, 2018 at 3 p.m. and decide how to move forward. Under consideration are ways to strengthen existing URMs, how to move construction forward in a timely manner and how to help people pay for upgrades. 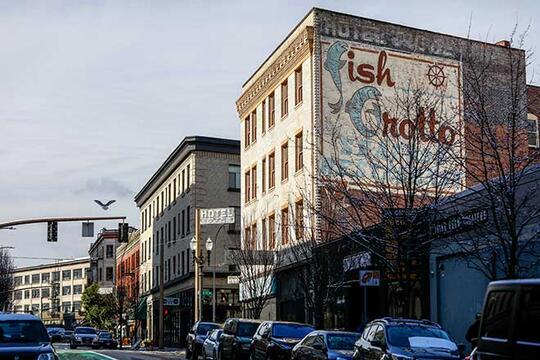 Every building at the intersection of SW 11th Avenue and SW Stark Street is on the list of URMs, including this one that houses the Fish Grotto and Joyce Hotel.

“The Engineering team, led by Amit Kumar, did an excellent job of working with the community to frame policy options that make the engineering choices and consequences clear for the City Council,” says Commissioner Eudaly. “That work has made it possible for us to have forward-thinking discussions about how to provide financial supports for doing URM work on properties owned by the city, the school district, affordable housing and faith-based nonprofits as well as privately owned properties. The bureau’s terrific work will make our city significantly safer. Many thanks to Amit Kumar and the whole Engineering team.”

Kumar says contributions from his team were essential to the URM recommendations under consideration.

Shelly Duquette, a Structural Engineer at BDS, was integral in the update and maintenance of the old URM database. Jake Brown of BTS GIS created an interactive map for the database to make it more accessible to customers. Eric Thomas, also a Structural Engineer, provided technical support in the URM policy development and provided historical context on previous city policies. And Andy Peterson, the Plan Review Services Manager, provided support and encouragement as the team worked at developing suggestions for the URM policy.

“Without the help and support of the team working together toward a common goal, we would not be where we are today on this project,” Kumar says. Kumar knows that the expense of safety measures can make things tough for building owners. But making the buildings safe might not be as expensive as many fear. That’s why the City will continue to examine how to best help.

“We have an obligation to keep our citizens safe,” Kumar says. “There is a cost associated, but a partnership needs to be built between the public and the City to upgrade existing URM buildings.”

Monday through Friday from 8 am - 5 pm. Leave a message with detailed information.