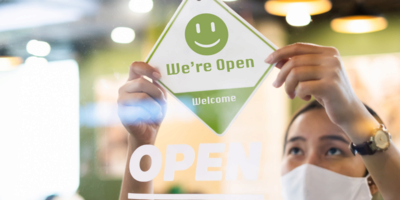 Prosper Portland’s Small Business Relief Fund provided a lifeline during the early days of the pandemic. Staff successfully delivered dollars to struggling businesses but in haste, short-changed program integrity. We make recommendations for building a stronger program the next time disaster strikes
Published
May 12, 2021 8:00 am

When the governor declared an emergency in late March 2020 and businesses began closing their doors, Prosper Portland jumped into gear to create a new program to provide grants to Portland small business owners with a focus on getting money to the most vulnerable: businesses owned by people of color and women.

There were two rounds of funding. The first round took place in the spring, immediately after the emergency declaration. It resulted in $1.3 million in grants provided to 281 small businesses. Resources came from the City’s General Fund as well as about $300,000 from private sources. Prosper targeted Round 1 to businesses in sectors that were set back by public health requirements, such as restaurants, personal service providers, and retail. Staff considered businesses with more than one employee and single-employee businesses separately.

The second round took place in the fall and resulted in $11.1 million in grants provided to 928 applicants. The second round consisted of federal funds from the Coronavirus Aid, Relief, and Economic Security Act (CARES Act) and came with stricter requirements. In Round 2, Prosper expanded the eligibility list to include more than just businesses affected by public health closures. Round 2 consisted of four groups: a general business pool, childcare providers, commercial and residential landlords, and social ventures (non-profits).

Prosper received 12,977 applications during both rounds and awarded 1,209 grants. The grantees were diverse, with 89 percent of awards going to people of color. Fifty-eight percent went to women.

All of this was accomplished quickly; Prosper awarded the first round of grants on April 7, 2020, less than a month after the emergency declaration.

Targeting the grants to those most in need and measuring success was critical. Small businesses owned by people of color were among the first victims of the pandemic in Portland. Just as the first Oregon cases were reported, Asian restaurant owners reported a drop in business because some customers were scared they might catch the virus from someone who looked Asian. The burden on small business owners generally increased as the pandemic intensified, and the governor issued a stay-at-home-order. Without customers, many owners were not able to pay their rent or employees.

Some steps that would ensure program integrity were short-changed

Staff had to balance the need to get funds quickly into the hands of affected businesses against careful adherence to the program requirements. This was further complicated by the potentially limited capacity of vulnerable businesses to provide the documentation needed. The result was that some measures to protect program integrity were revised during implementation.

Prosper had problems with the grant-selection process, documentation, monitoring, and reporting. Establishing minimum standards in these areas before the next emergency would allow Prosper to get funds out quickly protect the integrity of the grant program, and account for results.

Selection process was not transparent

Prosper did not document how it weighed the variety of factors it considered for each applicant or why any given business received a grant. Some outliers received grants despite scoring lower than other applicants with the same priority factors who did not receive grants. For example, the lowest scoring grantee in the single-employee group was owned by a Black woman. There were 148 higher-scoring applicants who were Black women who did not receive grants. Without documentation of the selection process, these decisions are inexplicable.

In the absence of documents, we analyzed applicant and award data to determine which factors were prominent in the selection process. The Board of Commissioners’ criteria prioritized businesses owned by people of color and women. The community members who advised the grant-selection process prioritized grants to businesses in North and Northeast and Outer Southeast Portland. We found that race of the business owner had an outsized influence on awards, with 89 percent of grants going to people of color. Our analysis showed that being a woman business owner, however, did not have an effect on who received a grant. Location had a small influence for the Round 1 groups but did not affect the business or childcare groups. Location in a priority area decreased the chance of getting a grant in the landlord group. 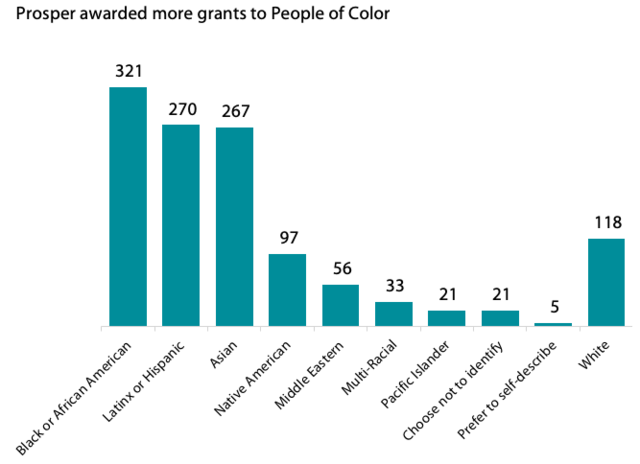 Eligibility criteria for a grant included requirements that businesses be registered with the Oregon Secretary of State’s Office and located within the Portland city limits. Businesses also had to be in business before a cut-off date. But when program staff found situations they didn’t anticipate when designing the program, these criteria were set aside.

For example, the criterion of whether a business was registered with the Secretary of State’s Office seemed straightforward. But while conducting eligibility checks, staff found other possible options, such as businesses registered but inactive, businesses listed as dissolved, or registrations created after the grant application deadline. In some cases, staff turned to other sources, such as registration in the state childcare system, rather than enforce the business registration requirement. In a sample of awards we reviewed, 42 grants totaling $318,000 dollars fell into this category.

Prosper also changed its interpretation of location eligibility, which at the outset seemed like another straightforward criterion. The application required that business addresses be inside Portland. Prosper then allowed firms outside the city to qualify if they conducted business in Portland or applied with a post office box address in Portland. Twenty-one awardees in our sample who were based outside Portland received grants totaling $223,000. Staff members said the community advisors recommended not restricting funding to businesses based in Portland, because some business owners have been displaced from Portland by gentrification.

There was only enough funding for 9 percent of more than 12,000 applicants to receive grants. Demand was so high that Prosper staff did not evaluate eligibility before it awarded grants and was reluctant to remove an award if it determined the grantee was ineligible. Shifting these criteria late in the process may not be fair to the many applicants who were not selected for awards or to those who chose not to apply because they thought they were ineligible.

System not designed to detect unauthorized use of funds

The program restricted grant funds for business expenses only, such as payroll or rent. Personal use was prohibited. Prosper did not require receipts from first-round grantees to ensure its restriction was followed. It addressed this oversight for the second round by committing to audit 5 percent of funds awarded by March 31, 2021.

Grant programs are vulnerable to fraud schemes. In a federal program with a purpose similar to Prosper’s Small Business Relief Fund, investigators documented millions of dollars used for ineligible purposes. A Florida man obtained $3.9 million from the federal program and used it to purchase a $318,000 Lamborghini sports car in the name of one his companies. A defense contractor in Hawaii misled lenders about how many employees he had and used subsidiary companies to mask the fact that he had already received $12.8 million in coronavirus relief funds.

Proper’s program designers overlooked this potential for misuse of funds. Staff didn’t look at receipts or require other documentation of how funds were used, because they said that it would be a burden to grantees who were already experiencing economic stress. One payment of $10,000 was stopped by the recipient’s bank. Had the bank fraud protection program not stepped in, Prosper would never have known the funds had been delivered to a potentially fraudulent account.

Prosper staff reported to the Board of Commissioners in April 2020 that there were no risks related to the program, even though no assessment had been conducted and verification was not possible without receipts. If it had been informed, the Board might have decided to accept a level of risk to ensure grant funds were distributed quickly. But that should be the Board’s informed decision to make.

Outcome assessment was not reliable

The goal of the Small Business Relief Fund was to provide interim financial relief for owners to retain their business and employees. Prosper surveyed Round 1 grant recipients to measure whether the program achieved its goal. The survey asked how recipients used funds, whether the funds allowed recipients to retain staff, and whether recipients anticipated being able to continue operations without additional support.

Results of the outcome survey were unreliable, however, because only 36 percent of grantees responded despite it being a condition of receiving a grant. Staff sent one follow-up email to businesses that did not respond but did no further outreach. Prosper didn’t require reporting because it didn’t want to burden grantees who were going through a stressful experience or may have gone out of business. Businesses who responded to the survey may have been different from the total pool of grantees in important ways. For example, businesses that closed or businesses that used the funds in ways that were not aligned with program goals may not have responded to the survey. Unrepresentative responses made the results unreliable.

The agency can use lessons from these initial rounds to strengthen its performance in future emergencies and evaluate results.

We recommend that Prosper Portland create procedures for future Prosper grant programs that will ensure that staff implement adopted program standards or officially change them prior to implementation.

View the response to the audit from Mayor Ted Wheeler and Executive Director Kimberly Branam.

We limited our review to the Small Business Relief Fund grant rounds: Round 1 grants awarded April, 7, 2020, and Round 2 grants awarded October 14, 2020. We did not include other parts of the program, including the loan program or the block grants awarded and distributed by community partners.

To accomplish our objective, we