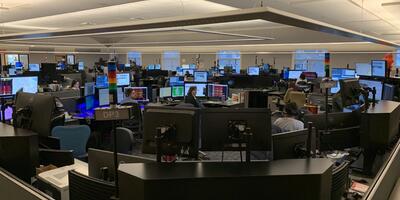 The mission of the Bureau of Emergency Communications (BOEC) is to work collaboratively with our community and public safety partners to ensure effective and timely 911 call answering and dispatching.

BOEC maintains the drive to meet and exceed national performance standards. BOEC continues to recruit and train dispatchers at a record pace, and after more than a decade of understaffing, all budgeted positions are filled. This is a significant accomplishment considering that 911 centers across the nation are struggling to find 911 Operators. While improved staffing benefits BOEC and our community, there has been a direct impact on facility overcrowding.

BOEC Key Performance Measures are focused on core activities. Performance is based on metrics, including meeting national call answering standards. Procedural adjustments have been made to answer calls more quickly. To maintain transparency, BOEC statistical reports are posted monthly and have shown steady performance improvement over the past year. BOEC continues progress with a highly customized Operations Staff Scheduling and Performance Analysis System, which aids in efficient staffing of the bureau as well as in identifying staffing gaps.

Bob Cozzie is the Director of the Bureau of Emergency Communications (BOEC).  He started his career as a 9-1-1 call taker for the El Paso County Sheriff’s Office in Colorado Springs, Colorado in 1995, and his career path includes trainer, lead worker, assistant supervisor, Training Coordinator, and Public Information Officer. He earned his Bachelor of Science Degree in Organizational Management from Colorado Christian University, and Bob and his family moved to the Portland area in 2003 where he was the Training Manager for BOEC, and later Director of Clackamas County 911.  He returned to BOEC in 2018 to assume the director role.

Bob serves on numerous committees that have a direct impact on the 9-1-1 industry and public safety, including:

He is a board member of Responder Life, a non-profit organization, which helps to equip public safety first responders to lead healthy and productive lives.

Bob has a military background having served Active Duty and as a Reservist in the United States Air Force.  He is married, and has four grown children and seven grandchildren and enjoys swimming, running, and a variety of other fitness activities.

Some of Bob’s favorite quotes:

“Never forget to be truthful and kind.  Hold these virtues tightly.  Write them deep within your heart.” – Ancient Proverb

“A good way to forget your troubles is to help others out of theirs.” – John L. Mason

“The leader is the ‘servant’ of his followers in that he removes the obstacles that prevent them from doing their jobs.” – Max DePree

“Be yourself.  Who else is better qualified?” – Frank Giblin

Lisa St. Helen began at the Bureau of Emergency Communications (BOEC) in September, 1995 and has worked as a 9-1-1 Call taker, Police and Fire Dispatcher, Coach, Supervisor, and Assistant Operations Manager.  Lisa became the bureau's Operations Manager in 2015.  When she started at BOEC, she never imagined she would build a successful and meaningful career in emergency services, but found a home where she least expected it.

Lisa is passionate about providing exceptional public service to the members of the very community in which she grew up in and still lives in today.  As the bureau's Operations Manager and City of Portland employee, Lisa enjoys and takes great pride in serving and supporting the call takers and dispatchers who serve the community 24/7 each and every day of the year.  It is her never-ending focus to create a work environment that is supportive, healthy, and caring, which she believes directly relates to providing the best service possible to the community.  Lisa is proud of the work that happens within BOEC and feels blessed to be a part of something so important.

On a personal note, Lisa is a life-long Portland resident, born and raised within just a few miles of where she works today.  Now that her daughter is grown, Lisa loves to read, work on puzzles, and travel both near and far.  She is grateful every day for the difficult work she is tasked with and looks forward to continuing that work well into the future.

Steve Mawdsley serves as the Assistant Operations Manager at the Bureau of Emergency Communications (BOEC).  He began his career in 2005 and has worked as a State-certified Call taker, Dispatcher, Coach, and Supervisor.  In his present role as Assistant Operations Manager, Steve is responsible for leading a team of supervisors who oversee the work of the bureau’s highly-trained calltakers and dispatchers.

Steve provides leadership and guidance to the supervisors regarding staffing, policy decisions, and professional development.  He is responsible for helping to maintain a positive work environment that honors multiple collective bargaining agreements and other established bureau and City policies.  He encourages collaboration and professional growth by distributing projects and educational opportunities among the staff.  He was the bureau’s lead manager on the successful implementation of Text-to-911.  He represents the bureau on both the Police and Fire dispatch committees and belongs to the Oregon Association of Public Safety Communications Officials (APCO).

Steve is a dedicated husband and proud father to three wonderful children.  He maintains involvement in his community’s Boy Scout Troop where his son seeks to follow in his dad’s footsteps by achieving the rank of Eagle Scout.

Steve brings to the workplace his real-world values of hard work, integrity, leading by example, and fairness.  He believes that his greatest responsibility is to support his team of dedicated 911 professionals so they can continue to provide exceptional service to the community and partner agencies.

“If everyone is moving forward together, then success takes care of itself” – Henry Ford

Todd DeWeese serves as the Assistant Operations Manager at the Bureau of Emergency Communications (BOEC).  He provides supervision, guidance, and mentorship to 14 front-line supervisors, as well as provides general oversight and guidance in operations on a 24/7 basis. He serves as an advisor to the bureau’s Operations Manager on policy, technical, and functional issues.

Todd has worked for BOEC since June 1994, initially as a Call taker and Police, Fire, and Medical Dispatcher, promoted to Supervisor in September 1999, and promoted to Assistant Operations Manager in May 2021.  Todd also has experience as BOEC’s Public Information Officer (PIO) and Emergency Management Coordinator.

Todd is tasked with creating, executing, and maintaining a career and leadership development and mentorship program open to all employees as part of the bureau’s Strategic Plan.  This program will provide opportunities for staff to increase their collective knowledge by cross-training disciplines, increase efficiency, and provide a greater understanding as to how the bureau and 911 profession works.  Furthermore, this project helps provide for and defines future succession planning while improving employee morale.  Todd is excited about the opportunities, as well as challenges he now faces in this role.

Away from work, Todd enjoys spending time with his family, grilling on the back deck, and watching Portland Trail Blazers, Portland Timbers, and Portland Thorns games.  He enjoys listening to old school music from the 1950’s, 60’s, 70’s, and 80’s while hanging out on his back deck.  Todd loves watching movies of every genre, but he really loves a good comedy

Melanie Payne serves as the Emergency Communications Training and Development Manager for BOEC.  She oversees instructors, certified coach-trainers and training teams as they promote competency, excellence, and functional skill development.  This position has four primary functions:

Melanie graduated from Arizona State University with a BS in Communication.  Her background includes instructing public speaking and small group communication at Arizona State University, recruiting and managing interns for major corporations, and leading certification and ongoing training efforts for the City of Phoenix Development Services Department.  She is proud to work with extraordinary people who are dedicated to promoting, and ensuring, public safety in this community.

Ryan DesJardins has been at BOEC since October, 2017.  Previously, he worked at Clackamas County 911 in Oregon City and Whitman County 911 in Pullman, Washington.  Professionally, Ryan is most passionate about improving the work environment and operational systems for the Bureau.  He wants BOEC employees to be supported properly so they are able to assist citizens, police officers, fire fighters, and medical responders as safely and efficiently as possible.

Personally, Ryan is most passionate about photography and caring for the small farm he lives on with his wife and daughter.  He is also frequently in his wood and metal shop building creations for his wife’s garden and his personal use.

Ryan has been working in the Public Safety field for over 20 years as a dispatcher, supervisor and manager.  His role at BOEC is to oversee quality assurance, risk management and organizational and employee accountability.  He oversees the Bureau’s Just Culture system of accountability and provides support to supervisors and management to design or redesign Bureau work systems to support employee and organizational performance goals.

Murrell Morley is the Technology Applications Manager for the Bureau of Emergency Communications (BOEC).  He has been with BOEC since 2000 and has worked as a police, fire and EMS Call-taker/Dispatcher, Coach, and as a Supervisor.  As the Technology Applications Manager, Murrell is responsible for managing the Versadex Computer Aided Dispatch (CAD) system and Vesta telephone system used by the BOEC Call-takers and Police & Fire Dispatchers, as well as the Mobile Data Computers (MDC) used by our partner agency responders in the field.   He is also responsible for maintaining the interface connections to the CAD system, which include paging (PageMaster), fire station alerting (Zetron), Law Enforcement Data System (LEDS), audio recordings (PYXIS), partner agency vehicle GPS/AVL, American Medical Response (AMR) CAD system, and the Media Map.

Patrick Jones is responsible for client services for BOEC. He is tasked with liaison duties between the Bureau of Emergency Communications (BOEC) and our police, fire, and medical service partner agencies within Portland and Multnomah County. Patrick’s client portfolio includes more than a dozen additional public safety entities at the local, regional, state, and federal level that partner with BOEC to provide unparalleled service to the citizens of Multnomah County.

Patrick started his career at BOEC in 1991 as a Call taker and Police Dispatcher. In 1994, following the move of fire dispatch services to BOEC, he became one of the first civilians to dispatch fire responders in Multnomah County. Since then, he has served as a Coach, Operations Supervisor, project manager and program coordinator.

In Portland and Multnomah County, BOEC is the conduit through which most emergency service information flows and Patrick is proud to support and facilitate the work of the men and women on both sides of the radio so that they can best serve the needs of the citizens.

Mike Grimm serves as the Emergency Management Coordinator for BOEC. Mike holds an Associate’s Degree in Fire Protection Technology and a Bachelor’s Degree in Occupational Safety and Health. He began his career at BOEC in August of 2000 as a dispatcher. After going back to school to earn his Bachelor’s degree, Mike decided it was time to stop being reactive to 911 calls and more proactive in emergency response. He is happy working for the city to ensure that the dispatchers he has known and loved for so long are safe when they need help.

Woodworking is his hobby and his way of melting away the stresses of the day.

Dan started working at PBEM in 2008, first as a program specialist focused on regional coordination, and then as public information officer in 2013. Dan started working for BOEC in 2018. He also previously served as a staff member in Portland Mayor Tom Potter’s office. He holds an M.A. in Political Science and B.A. in Political Science and Canadian-American Studies from Western Washington University in Bellingham, WA.